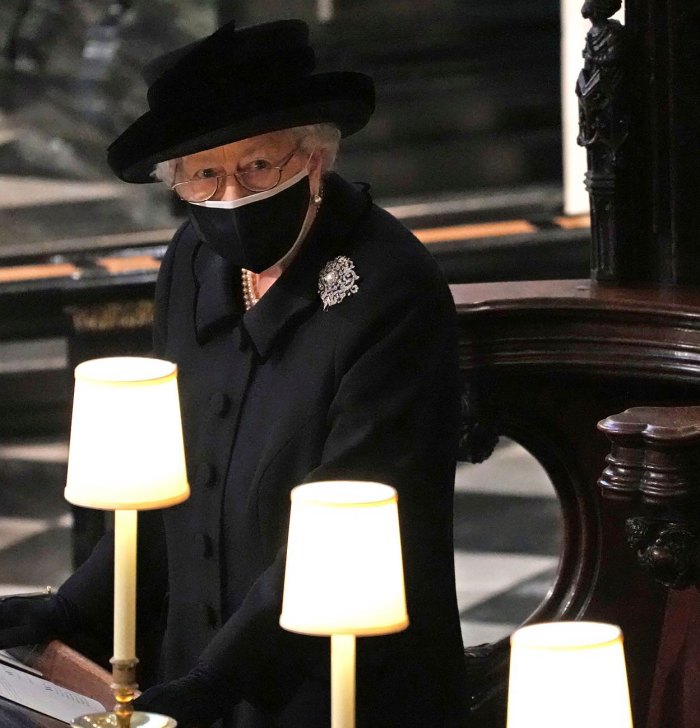 A hard goodbye. The royal family dressed in black for Prince Philip’s funeral on Saturday, April 17, but Queen Elizabeth added some very special — and significant — crown jewels to her ensemble.

The Queen, who will turn 95 on Wednesday, April 21, showed up to St. George’s Chapel wearing the Richmond Brooch on her left lapel. The gorgeous piece of jewelry, which features a detachable pearl and can be worn as a necklace, was passed down from her mother, Queen Mary.

It was a very special token from mum though, because the brooch was presented to Queen Elizabeth as a gift on her wedding day. So, as she laid her late husband to rest, it was a fitting piece of jewelry to put on display.

The brooch, which features diamonds set with a large center pearl, has many romantic connections in the royal family line. Queen Mary also chose to wear the piece as a necklace on her honeymoon.

This isn’t the first time Queen Elizabeth has worn the Richmond Brooch. In the past, she’s sported the piece of jewelry to several royal engagements, including to the Royal British Legion Festival of Remembrance at the Royal Albert Hall in 2018. The somber ceremony marked 100 years since the end of World War 1 and pays respect to all those who have died in war.

Queen Elizabeth wasn’t the only person to wear meaningful jewelry to the funeral. Duchess Kate paid tribute to both the monarch and her late mother-in-law, Princess Diana, with her jewels.

The 39-year-old royal wore the Queen’s pearl choker, which was previously lent to the late Princess Diana for a state banquet in the Netherlands in 1982. Her pearl earrings were also on loan from the queen.

Queen Elizabeth and Kate were among the 30 members of the royal family who attended the funeral, as the ceremony was kept on the smaller side due to the COVID-19 pandemic. Prince William, Prince Harry, Prince Charles, Duchess Camilla and Princess Anne were also among those at the chapel.

Notably not in attendance was pregnant Meghan Markle, who couldn’t make the trip. “She can’t go on doctor’s orders,” an insider told Us. “She is too far along to fly and it’s recommended she rest in the final months.”

Prince Philip passed away on Friday, April 9 at the age of 99.

“It is with deep sorrow that Her Majesty The Queen has announced the death of her husband, His Royal Highness The Prince Philip, Duke of Edinburgh. His Royal Highness passed away peacefully this morning at Windsor Castle,” the royal family said in a statement.