Not at all flattered. Kesha could not hide her embarrassment while watching Caitlyn Jenner cover her hit “Tik Tok” on The Masked Singer.

The Grammy nominee, 34, reacted to the 71-year-old reality star’s performance via TikTok on Tuesday, April 6. “Live for a cover and live for this outfit…. but i mean i have to go,” Kesha captioned a video of herself retreating into her shirt as Jenner’s rendition played on screen. She added, “Feeling like P Diddy… I think?”

The Olympian was unmasked as The Phoenix during the March 17 episode of The Masked Singer. After her elimination, she opened up about the difficult process.

“I worked for two months on these three songs,” she exclusively told Us Weekly in March. “I did ‘Tik Tok’ and I was going to do The Temptations song, ‘I Know You Wanna Leave Me,’ and I had a John Denver song. It was tough to get those down. If I were to go [and do] all the [songs] at the finals, I would have had to learn eight songs. It took me so long to get a couple songs down.” 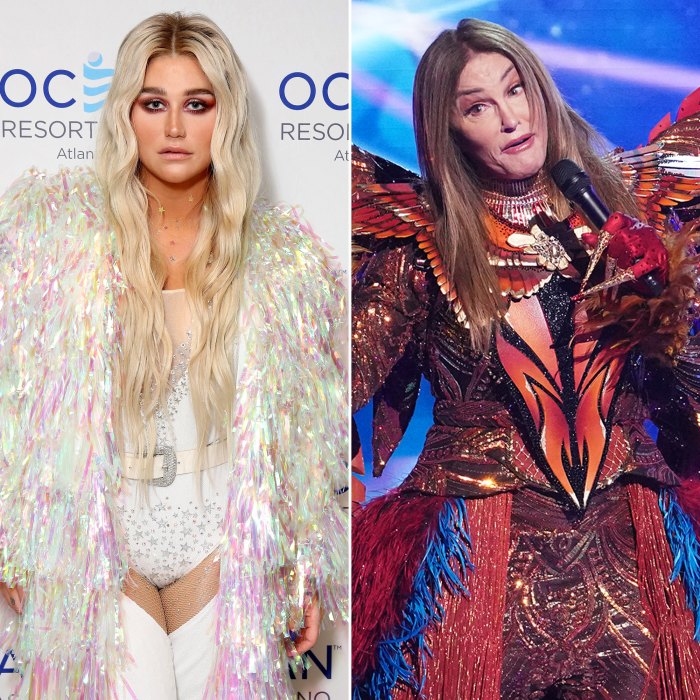 Jenner relied on son Brandon Jenner, who is a musician, for help as she trained for the reality competition series. “He has a studio in his house, so I went downtown to his studio where I could record it and I worked on the songs with him. It was really great,” she explained. “Brandon got really into it and it was a big bonding moment for us. It was fun working on the songs with him.”

Every Kardashian-Jenner Divorce Over the Years Read article

The I Am Cait alum’s daughters Kendall and Kylie Jenner, meanwhile, were surprised by her decision to appear on the Fox show. “Kendall and Kylie, when I told them I was doing The Masked Singer, they gave me this strange look and said, ‘Dad, why are you doing this?’” she recalled. “I told them, ‘I need a challenge! I’ve just been sitting around, I want to do this.’ They said, ‘You are crazy.’ I’m interested for Kendall and Kylie and the rest of my family to see it.”

She added: “I’ve always told my kids, ‘The ability to grow is directly related to the amount of insecurity you can take in your life.’ And boy, was I insecure about singing. So, I thought, ‘Let’s try this and put myself out there and try something I’ve never done before.’ If I’m telling my kids this, the least I could do is take my own advice.”

Hate Changing Out of Your Loungewear? You Need This Bestselling Romper
‘Bridgerton’ Cast: What Rege-Jean, Phoebe and More Look Like in Real Life